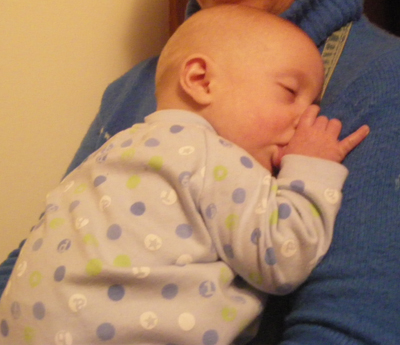 I have been repeatedly asked (begged?) by visitors to my website to address pregnancy and adrenal fatigue. Sadly, not a single book on my shelf (and there are many!) says anything about this urgent topic. In fact, surfing the vast Internet yields very few results either.

I can understand why. Who wants to study a pregnant mother? Can researchers possibly endanger the life of a growing child by giving one type of help to control group A and another to control group B? Ethically, it’s very difficult to study pregnant women.

In the meantime, countless pregnant women are suffering with adrenal fatigue and even full-blown Addison’s disease. Furthermore, babies are born with weakened adrenal glands as a result of their mothers’ exhaustion.

I tremble to venture into this area. I have personally carried five babies before my diagnosis of Addison’s disease, and two more babies have been born since. Yes, I’ve learned a lot. No, I haven’t solved many of the most severe problems (such as premature birth).

I have corresponded with doctors from around the globe and personally questioned doctors from top research hospitals. They are shy about definite answers, too. The fact is, we just don’t know much about how to help pregnant women with adrenal fatigue.

For hours during the last two pregnancies, I scoured the Internet for help. I especially concentrated on medical journals, to see what research has been done in the area of adrenal fatigue. I’ve found research on animals, especially sheep, but none of it has personally been much help to me.

Therefore, because of the terrible famine of information in this area, I’m going to offer some suggestions from my own experiences.

To me, this is one of the top reasons why I want to be sure my fatigue is treated. As miserable as fatigue can be, I can manage just about anything for the sake of a sweet little baby. However, I certainly don’t want to pass my problems on to my own children!

From what I can tell, my body starts to draw upon the adrenal glands of my growing baby around 20 weeks into the pregnancy. Some women feel more energy at this point, but this energy comes at the expense of the baby. Rest MORE than you think you need to! Be diligent about your nutrition!

Supplements and medications in pregnancy are complicated things.

Many of the herbs commonly used to treat adrenal fatigue (such as licorice) are questionable at best during pregnancy. In addition, common supplements such as IsoCort, or medications such as Cortef and Florinef, have a totally different effect during pregnancy. Some doctors recommend staying at pre-pregnancy dosages for the entire pregnancy, but I’ve found that this results in unbearable fatigue. Some studies show that the adrenal glands normally produce 2-3 times more cortisol during pregnancy, yet only half the normal amount of aldosterone. Oh, how complicated it can all be! My advice? Listen to your body, and find a doctor who will work carefully with you, using symptoms as a guide. (This type of doctor can be very difficult to find, by the way.)

Monitoring your health in pregnancy can look different.

You’ll often hear me telling you to monitor your health by tracking your basal body temperature, your blood pressure, your blood glucose, and your hormone levels. Alas, during pregnancy, “normal” is not normal. Doctors are starting to discover that “high” blood pressure and “high” blood glucose can actually be normal during pregnancy. Sadly, no one knows exactly what “normal” is. Much more research is needed in this area.

Diet during pregnancy is different.

Your dietary needs during pregnancy are different, with greater needs for protein (80-100 grams per day is recommended), greater needs for sodium, and a propensity to low blood sugar. My advice is to always have some good-quality carbohydrates with your protein, to eat plenty of good fats, to salt your food to taste, to drink lots of water (divide your weight in half and drink that many ounces per day), and to avoid simple sugar as much as possible. Keep a diet diary so that you’ll know how foods affect you specifically. Finally, eat at regular times each day, including snacks between meals and before bed.

You need plenty of rest.

Listen to me carefully! When you’re pregnant, you’re working very hard to grow a little baby. You require more rest than normal! It’s a fact. Get to bed before 10 p.m. Don’t get up until you wake up naturally, probably between 7 and 9 a.m. Take an afternoon nap. Don’t overdo on physical activity, such as walking, exercise, shopping, and outings, especially on hot summer days. Get help from others!

Did you know that? Is it any wonder that so many mothers of many children (four or more), women who are trying to do what is naturally best for their children, are fatigued? Our pregnancies are too closely spaced together, we’re breastfeeding for longer periods of time, we’re embracing attachment parenting with its accompanying lack of continuous hours of sleep for mother or baby, and we’re often tandem nursing. In addition, we’re doing all of these superhuman feats on bodies that are already exhausted from generations of nutritional and toxic damage.

Are there answers to these pregnancy problems? Yes, but…

Truly, we need years of good nutrition and good sleep to heal our bodies of adrenal fatigue, but for mothers in their childbearing prime, we don’t always have time on our side. Don’t try to be a superwoman!

In conclusion, my husband has repeatedly stated that until we women with adrenal fatigue start writing about what helps us and what doesn’t during pregnancy, other women won’t be helped. If you have your own blog or website, please share your experiences with others, to spare them some of the pain and trouble you’re enduring! (If you don’t have a blog, feel free to comment here. Also feel free to post links to your blogs.)

I am listing some very technical links to sites that reference Addison’s Disease, cortisol, pregnancy, etc. Maybe these will give you a place to start in your research:

Welcome to our website! Check out our learning center for lots of helpful articles. Thanks for visiting!

Are you struggling with fatigue? I invite you to download our free audio, “Can Fatigue Be Fixed?”, or check out Anne's Too Tired book. Thanks for visiting!

Let's talk about healthy women and healthy families, with an emphasis on adrenal fatigue.